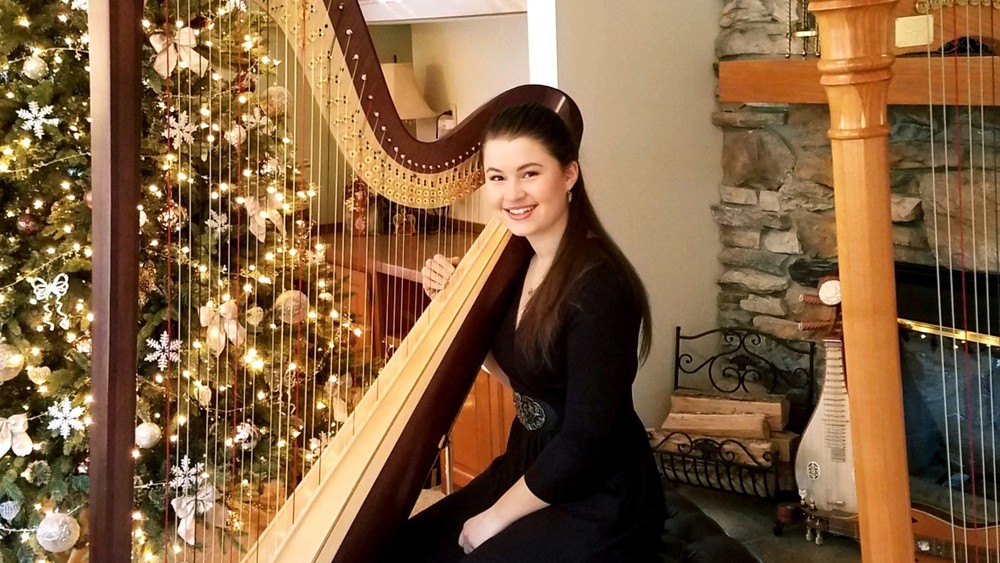 Concord Senior Evelyn Theinert wants to let her light shine by spreading the love of God to everyone around her, which in return gives her hope. Evelyn, age 17, hopes to pursue a career playing the harp, and has big plans for her upcoming college auditions in the spring.

But let’s trace her story back to where it all began.

Evelyn grew up in Germany along with her parents and little sister. In the summer of 2015, her father got a job in Elkhart, Indiana and Evelyn and her family became part of the Concord family. Like many other students at Concord, Evelyn was given the opportunity to participate in extracurricular activities, such as golf.  While she loved golf, it was the harp that would drive her passions into the future.

DEVELOPING A LOVE OF MUSIC

Even from an early age, Evelyn was constantly being influenced by all of the music surrounding her.

She grew up in a musical household in Germany. Family time was spent with her dad, Markus, conducting the symphony, and her mom, Karin, playing the french horn.

“I would watch my parents from the audience with my younger sister (Grace), everyone knew we were the conductor’s kids because we were the only children in the audience,” Evelyn said.

From then on, Evelyn knew she wanted music in her future. She recalls, when she was a four year old, “spinning around the living room listening to harp music.” Evelyn thought, “Man, I really want to play this instrument.” There were many reasons why Evelyn fell in love with the harp -- the beauty of the instrument, the vibrant sound, and the way her eyes were drawn to it. However, her parents were a little hesitant about giving her harp lessons at such a young age. So when she turned five, Evelyn began with piano lessons as a compromise.

She quickly excelled, and her piano instructor said that despite Evelyn’s young age, she was one of the most advanced students she had ever had.

So that evening as soon as she arrived home, she told her parents what her teacher had said. Her parents agreed to harp lessons, and Evelyn got her wish. A couple years later, her father was given a job opportunity in Elkhart and that was where her journey truly began.

When Evelyn and her family arrived in the United States, Evelyn skipped sixth grade and went straight to seventh. She enrolled at Elkhart Christian Academy, but soon transferred to Concord. She was looking for more challenges, and loved the music department offered at Concord.

She was also able to find something else she really clicked with -- golf. Back in Germany, her grandpa helped teach her how to play. Now in present day, Evelyn and her teammates accomplished a great season that would leave Evelyn satisfied as she got ready to leave high school. Evelyn, along with her teammates, were the first girls golf team to ever make it to the state finals for Concord. On the way to that landmark, the team also won conference for the first time in history, and sectionals for the second time.

“It was an awesome season full of surprises,” she said.

In addition to being a student, athlete, and musician, Evelyn said, “I also enjoy discovering things such as different languages, foods, and traditions that other cultures have.” She also enjoys listening to harp, classical music, German music, and fun upbeat music that makes her happy.

With a fulfilled past, Evelyn has greater things on her horizon to look forward to.

Evelyn has a very bright future to look forward to. She has narrowed her choices down to two colleges that she will audition for in the spring -- Indiana University Bloomington and Cleveland Institute of Music.

“The (IU) Jacob School of Music is really awesome, I love the teacher there,” she said. At the Cleveland Institute, only one harpist is chosen.

“Both schools are very competitive, and I would be so happy if I got into either one.”

However, auditions are going to look a little different this year due to the COVID pandemic. Evelyn will record and send in her audition, rather than performing in person.

“In a real life performance, you only have one chance, I think it’s better that way. You give your best for that one chance. It’s a different mindset while recording, not every performance is going to be perfect,” Evelyn said.

After she is finished with her college experience, Evelyn wants to travel the world, and possibly move back to Germany.

“I want to find a job in Germany and start a life there and have a career there. It would also be very cool to be close enough to travel to Switzerland, Austria, and France.” She has family in both the U.S and Germany, and has not been back since she left years ago.

No matter what Evelyn decides to do in her future, she will be spreading the love of God and hope to whoever may be lucky enough to cross her path.